Go All Out! Wiki
Register
Don't have an account?
Sign In
Advertisement
in: Characters, Original character, Human

Male
Yakshi is a playable character for Go All Out, an Original Character who is a long lost shadow warrior that fought in the Great War on Cadread.

Yakshi was born on Cadread over 1000 years ago and fought during the Great War on Cadread to defeat Calamity in his first form.

However, he failed during his fight and was trapped in a broken dimension that Calamity caused.

Many years later, when Calamity had woken up, Yakshi woke up as well. He escaped the broken dimension, found other warriors that the lights brought to Cadread, and now he wants to find and fight Calamity once again.

Yakshi has no hair on his head, he is bald and his eyebrows are covered by goggles. He has a scar on his left eye and wears black and red vision goggles.

Yakshi wears a black blazer suit with a red shirt and a black tie, He also wears light grey pants and black shoes.

He fights duel wield with two metal batons which he named Gaia & Kobold, one red and another grey.

Yakshi dashes forward and creates a helicopter spin on the side, dealing anyone near him, then retreats back to where he was.

Yakshi grabs a fighter, pushes them upwards and starts attacking them with multiple moves until the final strike where he kicks them downwards, pushing them back to the ground. This move only works if Yakshi successfully grabs a fighter. 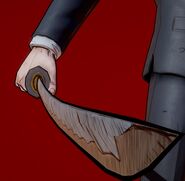 teaser image for Yakshi where he has a sword 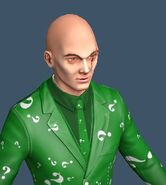 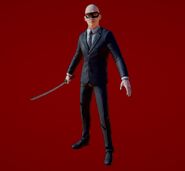