Go All Out! Wiki
Register
Don't have an account?
Sign In
Advertisement
in: Characters, Game character, Human

Male
Teslakid is a fighter in Go All Out! He's a young kid who has Tesla weapons from old Teslamancers. He comes from a indie platform game Teslagrad

the events of 'Teslagrad'[]

The King's men were too strong and crushed Teslamancers, however one was kept alive. The one that would later stand up against the King and free Teslagrad from his rule, Teslakid.

He grew up with his mother as his farther died when he was very young. He learned about the past and when the time came, he set out to his journey.

He went to the old abandoned castle where Teslamancers used to work and found equipment that he used to get through the castle. He moved through collecting artifacts and scrolls that his ancestors left behind. Once he has gotten everything he needed, he set off to face the king. The battle was hard but in the end, he used his teslastaff to have the crown suck the King away into nothing. He had fulfilled his purpose and freed Teslagrad.

After he defeated the King, Teslakid had been taken to Cadread by light. Upon his arrival, he met the Cadread Natives and learned about Calamity. With no hesitation, Teslakid offered his help to the natives, and set forward towards another journey that's bigger than his previous one.

Teslakid's appearance is similar to what he looks like in his game, though it has some slight differences. His skin is slightly darker and he has brown hair instead of black.

He wears a white long sleeved buttoned shirt and brown pants with straps, along with some pockets on his belt.

Teslakid wears power tools from his game that can be used in a fight: he appears to wear the Magnet Glove and Blink Boots. He also holds the Teslastaff, which can generate electricity.

Teslakid spins in the air while shooting a red spark that deals knock down and damage to anyone who gets hit by the spark. This can only be activated when Teslakid is in the air.

Teslakid creates a big charge of lightning that has a massive area attack and deals damage and knockback to anyone who is in the area. Teslakid can also use his blink boot to move from one place to another before creating the shock. 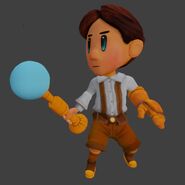