Go All Out! Wiki
Register
Don't have an account?
Sign In
Advertisement
in: Human, Game character, Characters

Female
Lady Scarlet is a playable Fighter in Go All Out! A supporting character from Oscar Brittain and Akupara Games, Desert Child 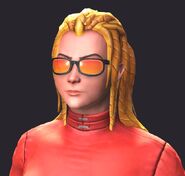