Djinn is a supporting Character for GAO

when summoned Djinn will make a taunt then do a short range attack, if a fighter gets hit, they will spin around while inside a small tornado, stunned before dealing damaged by the demon 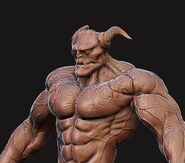 early model appearance of Djinn
Add a photo to this gallery
Retrieved from "https://go-all-out.fandom.com/wiki/Djinn?oldid=1796"
Community content is available under CC-BY-SA unless otherwise noted.