Baydos Potato, Go All Out Community

Baydos (or Baydos Potato) is a supporting character for Go All Out, based on a real life Youtuber and someone from the Go All Out Community going by the name Baydospotato.

Baydos is an Australian YouTuber who make strange yet interesting videos, he has an interest of Potatos and created a Potato gun in which he uses in battle

(Baydos if you want to put more about yourself, you can add something here)

Baydos uses his Potato Gun to shot potato projectiles, he can also go from place to place to shoot his gun, however he can take damage and killed.

unlike Baydos Potato, Baydos is more focused on being a meat shield, he doesn't shoot potatos but go as close as possible, blocking any attack, including Lvl3s to keep the fighter safe. just like Potato, he can take damage and killed.

you have to play the entirety of Duel mode while wearing the Big Baydos head equipment (in which every fighter except Zorro and Lady Scarlet has) then defeat the Baydos secret boss fight, by doing this, both 'Baydos Potato' and 'Just Baydos' will be available to purchase in the GAO store

Baydos has a secret Boss fight within the game. in order to go into this boss fight, you must play Duel mode playing as a fighter wearing the 'Big Baydos Head' equipment.

(will add more about the boss fight) 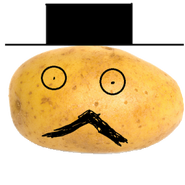 Baydos' first design by Yarheeguy, which is used for the Supporting Character Contest

early concept of Baydos' abilites with the Potato gun

GAO Fighter lineup by Yarheeguy where everyone is Baydos, (this inspired BSG to make the Big Baydos Head equipment.) 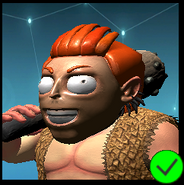 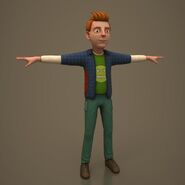 3D model of Baydos
Add a photo to this gallery
Retrieved from "https://go-all-out.fandom.com/wiki/Baydos?oldid=1777"
Community content is available under CC-BY-SA unless otherwise noted.