Baron is an upcoming Original Character for Go All Out! a green bird in a robotic mech

Baron is a green parrot wearing a black hat, he rides a gaint metal mech 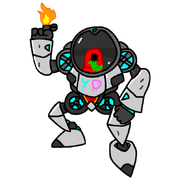 submittion art of Baron by Chuumoon

moveset for Baron by Chuumoon

Chuumoon art of Baron without the mech with Fawn, who came 2nd in the competition
Add a photo to this gallery
Retrieved from "https://go-all-out.fandom.com/wiki/Baron?oldid=1433"
Community content is available under CC-BY-SA unless otherwise noted.